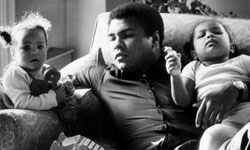 Once, when a close friend asked Muhammad Ali how he would react if the elder of his two sons wanted to pursue boxing, the three-time heavyweight champion of the world reportedly replied that he would first try to shoot down -- or rather, knock out -- the notion [source: Smith]. What Ali probably wasn't betting on, however, was that it would be not his son, but his youngest daughter Laila approaching him about her pugilistic career aspirations. Out of his nine children, Laila Ali was the only one to follow her father into the ring. Having battled Parkinson's disease, which was possibly exacerbated by trauma sustained during his vicious boxing bouts, Muhammad Ali intentionally didn't raise a family of fighters, since he understood the high risks that came with it. For that reason, Ali may have welcomed Laila's 2007 decision to hang up her gloves after eight years of boxing and start a family of her own [source: Clarke]. Ali died in 2016.