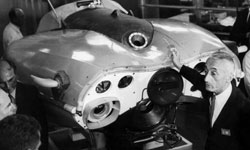 Not too long after oceanographer Jacques Cousteau and engineer Emile Gagnan invented a novel mechanism for breathing underwater in 1943, Cousteau tossed his 7-year-old son Jean-Michel overboard while on the ship Calypso. But not to worry: Cousteau and Gagnan's Self-Contained Underwater Breathing Apparatus -- a.k.a. SCUBA -- ensured that little Jean-Michel could easily weather the plunge [source: Ocean Futures Society].

Traveling around the world aboard the Calypso, Jean-Michel and his younger brother Philippe learned how to scuba dive and observe undersea environments alongside their red cap-wearing father. Like a Partridge Family at sea -- perhaps singing the occasional shanty rather than '60s pop -- Cousteau, his sons and his wife Simone explored the ocean deep and broadcast their findings of previously unseen sea life in more than 80 documentary films [source: Israel]. In 1979, Philippe was killed in a seaplane accident, but Jean-Michel carries on his late father's aquatic environmentalism as a public voice for ocean conservation.