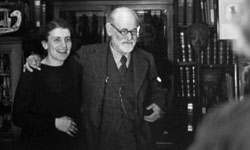 In 1885, in the midst of building his fledgling career around neurology rather than psychoanalysis, Austrian Sigmund (listed on his birth certificate as "Sigismund") Freud married Martha Bernays. The eventual father of psychoanalysis also fathered six children: Mathilde, Jean Martin, Oliver, Ernst, Sophie and Anna. Given Freud's intensive theories on sexually fraught parent-child relationships, such as the Oedipus complex, he doled out deliberately distant displays of affection toward the kids at home. To avoid the intimacy of hugs or kisses, Freud instead pinched his children's cheeks with his thumb and forefinger [source: PBS].

Despite that physical detachment, the youngest child, Anna, carried on the Freudian torch, later conducting groundbreaking work in child psychoanalysis. Building on her father's research on the ego and id, or conscious and subconscious, Anna Freud developed the theory of conscious repression and defense mechanisms that humans wield from early ages in order to avoid pain [source: Encyclopædia Britannica]. In 1986, her London home was converted to the Freud Museum, a lasting testament to Anna's and Sigmund's influential daughter-father relationship.