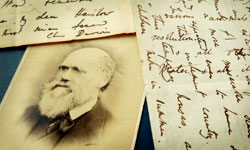 Like his contemporary Prince Albert, Charles Darwin also found his romantic match on a nearby branch of the family tree. Despite his knowledge about potential genetic mishaps from inbreeding, Darwin married his first cousin and devout Christian Emma Wedgwood -- but not after plotting out the social and emotional pros and cons of the hypothetical nuptials in his journal, like any calculating scientist might [source: Keim]. Later, as Darwin hammered out the details of his theory of evolution, he and Emma had 10 children, although three died before the age of 11.

Contemporary scholars have questioned whether the death of Darwin's oldest daughter, Annie, at the age of 10 years old, influenced the naturalist's decision to hold off on publishing "On the Origin of Species" for more than two decades [source: Krulwich]. Deeply distraught by Annie's death from tuberculosis, which may have been linked to inbreeding, Darwin was too overcome to even attend her funeral, and he might have sat on his groundbreaking book until 1859 as a way to shelter his grieving wife from public attention [source: Krulwich]. Later, he requested -- to no avail -- that the British government gather data on cousin marriage and health data from their offspring to examine the population-wide effects of inbreeding [source: Harmon].