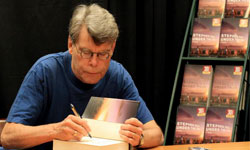 Early in his writing career, horror master Stephen King decided to publish a few novels under the pseudonym Richard Bachman. But after the fifth Bachman book was released, the jig was up. The author of "Thinner" was actually Stephen King, the literary world discovered, and the revelation catapulted the book up the best-seller list [source: Neihart]. When King's younger son, Joseph, began peddling his first horror novel, "Heart-Shaped Box," to publishers, he took a cue from his dad and went with a pen name as well. But like history repeating itself, it didn't take long for folks to deduce the real identity of Joe Hill.

Interviews with Joe Hill trace and retrace his desire to establish a writing reputation outside of his father's vast shadow, but it's a familial burden he doesn't seem to begrudge. In 2012, King and Hill announced a collaboration on a graphic novel series, "Road Rage," which will follow the adventures of an outlaw motorcycle gang [source: Truitt and Memmott]. It doesn't look like Joe Hill has any plans to abandon his pseudonym and go back to Joseph Hill King, though. After all, that's the name that's grappled up the best seller list. Like father, like son.

If you look around the Internet for the world's most famous fathers, the names that pop up are generally celebrities. And certainly, Martin Sheen, Brad Pitt, Will Smith and the like are notable dads in their own ways. But with this 10 Famous Fathers list, I wanted to get out of Hollywood and highlight some of history's best-known men in whose case fatherhood might be more of a side note to their success. Each of these men clearly left an imprint on the modern world, whether in science classrooms or libraries or music halls, but they also profoundly impacted their children's lives -- some of whom followed in their father's footsteps and others who fled their fathers' awesome legacies.