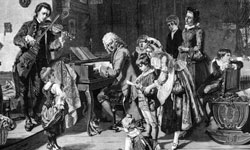 Johann Sebastian Bach stands out as one of the most significant composers in the baroque and classical canon, and it's no wonder, since music blossomed throughout his family tree. When he was born in the rustic German city of Eisenach in 1685, family members were already well established as the go-to organists and violinists in the area, having delighted residents' ears since the first Bach relocated there from Hungary in 1600 [source: Pandi]. Once the prolific composer and teacher J.S. had his own expansive brood (he fathered 20 children, though only 10 made it to adulthood), his four sons also trained in the family's aural trade.