by the Editors of Publications International, Ltd. & Matt Cunningham
Prev NEXT
2 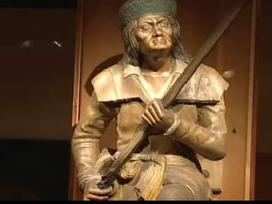 Disney named him the King of the Wild Frontier, but who was the real Davy Crockett? Learn more about the man behind the legends in these videos.
American Heroes Channel

Many fads from the 1950s have tie-ins to media, and for good reason: Between the booming popularity of television and an increasingly mobile population hungry for entertainment, fads related to TV and movies had an open field in which to grow.

One fad from that era could be seen as the forefather of today's media-driven pop fads: For a few years at least, millions of postwar-era children wouldn't be caught dead outside without their prized coonskin hats on their heads.

The quirky hats replicated the one worn by actor Fess Parker in his role as frontier legend Davy Crockett in Disney's hit 1954 miniseries. The Frontierland series was part of the popular weekly show, "Walt Disney's Wonderful World of Color," and it spawned an estimated $100 million worth of coonskin cap sales. The boom was an early example of the power of the then-novel concept of a TV product tie-in [source: The Fifties Web].

Modern TV watchers rarely -- if ever -- sport coonskin caps, but it's common to see viewers turn a popular sitcom actor's hairstyle or fashion statement into a consumer fad. Disney may have stumbled onto an unexpected pot of gold with Davy's coonskin cap, and it set a standard that's still very much alive today.