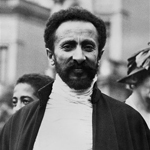 While his rule is approached with ambivalence by millions of Ethiopians, Emperor Haile Selassie I, who ruled the country from 1930 to 1974, is considered by some followers as the second coming of the Messiah. His given name, Ras Tafari, may ring a bell.

Selassie's rule was focused on a policy of educating his people, bringing Ethiopia in line with the powerful nations of Europe, and distributing land and wealth to his poverty-stricken population. He is also credited with creating Zion in Ethiopia, a paradise on Earth that served as a fabled homeland for the "Back to Africa" movement established by Marcus Garvey in the early 20th century. Indeed, when Garvey told his followers to look for a redeemer crowned as a black king, a number of black observers concluded Garvey's prophecy had been fulfilled and established Rastafarianism, a black nationalistic religion.

The religion was more pronounced in Jamaica, which followers considered their captivating temporary land. Although his spirit was frequently channeled by his followers through their use of marijuana, it's not clear that Selassie ever used the drug and he was known to abstain from drinking throughout his life [source: Cardillo].