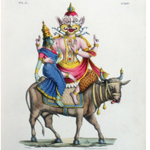 Shiva and his consort Parvati atop a sacred bull.
Photos.com/Thinkstock

Although having blue skin, more than one pair of arms and a bent for dancing on corpses while surrounded by fire, Shiva as a concept isn't necessarily all that fearsome. In much of Hindu tradition, he figures as the supreme being in the pantheon of gods, the destroyer who takes us from this life to the next -- and all the ones that follow.

Shiva is also associated with the marijuana plant. In fact, he is considered to be a fan of the intoxicant. As a result, his devotees like to smoke a lot of pot and hashish on Shiva's holiest days. In Nepal, Shiva is honored in such a way on Mahashivaratri, Shiva's big festival. At the large temple in the capital city of Kathmandu, pilgrims assemble to honor Shiva that night and there's plenty of people selling marijuana and hashish on hand to accommodate the followers. Although Westerners consider it a drug, the Nepalese consider pot a sacrament, or Prasad (holy food). On that one day, one can possess and comsume the drug legally [source: Karki]. Pot sales are prohibited outside of the temple, although its use enjoys protection by law within the temple [source: Asia News].