by Josh Clark
Prev NEXT
5 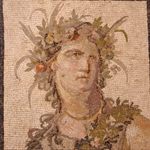 A mosaic of the party god Dionysus, known in Rome (where this was made) as Bacchus.
Hemera/Thinkstock

The Greek god Dionysus, or Bacchus, was a son of Zeus and the god of the vine. He spent a good deal of time wandering around the Middle East and the Mediterranean battling with some mortals, teaching others to cultivate and worship the gods. In all cases, however, he traveled with a party entourage of women, satyrs (half man, half goat) and his friend Pan, the god of shepherds and flocks, as they held festivals of wine and revelry.

The idea was that Dionysus was capable of bringing humans into a state of ecstasy, and later his worship provided the same. While it appears odd, or at the very least fun, compared to worship of other gods across the pantheons, the revelers' drunken and orgiastic worship of Dionysus followed the same structure that other worship does. By partaking in the god's gifts to his followers, the Dionysian cults received a bit of his immortality by proxy [source: Willoughby].