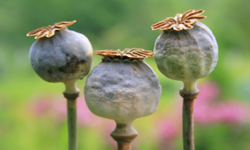 The opium poppy at harvest time. The sap from the plant is the preferred means for a bhopa to commune with the Rajasthani folk god Bheruji each day.
©iStockphoto.com/Thinkstock

Bheruji is what you might call a local god. He is a protector of remote villages located in the Indian state of Rajasthan, which shares a border with Pakistan. When a new year dawns, stone statues of Bheruji are carried around the villages he protects in night processions designed to maintain his watch over them for the next year.

In some villages where Bheruji serves as a protector god, a daily ritual is held in his honor. Villagers will make their way to the thanak (shrine) each afternoon to attend the ritual performed by the bhopa, a group that formerly served as royal court entertainment, but has been pushed toward the fringes of modern society and who serve as minstrel priests of sorts.

During the daily ritual to Bheruji, the bhopa enters the trancelike state of bhav, essentially possession by a spirit or force, by ingesting opium. The opium may either be eaten raw or drunk in a water solution called kasumba. The bhopa may also pass out opium for followers to ingest during the ceremony as well [source: Kumar]. Once the opium takes effect and bhav has been achieved, the bhopa distributes divine prophecies and assurances from Bheruji about the followers' future.