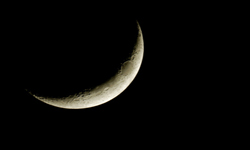 A waxing crescent moon; the vessel is being refilled with Soma for the gods.
©iStockphoto.com/Thinkstock

Soma, an ancient Hindu god, is many things. He is the afterworld, the moon, inspiration and the god of poets and a bull. Not only does he enjoy drugs, he is a particular drug: the soma plant, known more commonly as ephedra vulgaris. For millennia, Hindu warriors have drunk a concoction derived from the soma plant. This drink was said to give them a sense of euphoria and ecstasy and helped warriors get over the fear or anxiety of an upcoming battle. As a drug, the god Soma represented a link between the world of the gods and this world [source: Naylor].

It is the consumption and refilling of this concoction that accounts for the waxing and waning of the moon in ancient Hindu tradition. As the drink is drunk by other gods, the moon wanes; it is refilled once more and thus waxes.

In 1887, a chemist named Sedalano became the first to isolate the active ingredient in the soma plant, amphetamine [sources: Freye and Levy].