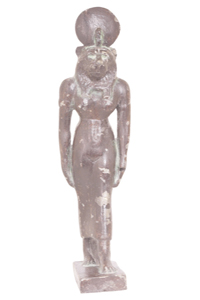 A statue of the Egyptian goddess Bast, with a lion's rather than a cat's head, as she was depicted early in Egyptian civilization.
©Getty Images/Thinkstock

Bast, the feline-headed cat goddess, is a major figure in the ancient Egyptian pantheon of gods. Like many other deities in other religions, she was dichotomous in nature. In one role, Bast served as a protector for her followers; in another, she destroyed souls that failed any test required to pass through the underworld after death.

The goddess was allegedly the recipient of the Morning Ritual, a ceremony that required the burning of marijuana or hashish, along with other herbs and incense like myrrh. With the incense burning, her followers, mostly women, engaged in sex, the premise being that female climax produced good health [source: This Side of Sanity]. While this legend persists, it remains controversial and disputed, and may actually be based on more recent lore [source: Cass].

That said, Bast's followers were known to party. The Greek historian Herodotus wrote of pilgrims on their way to the annual celebration for the goddess held at her temple at Bubastis. Drunken followers assembled by the hundreds of thousands during the celebration, drinking wine and dancing [source: Seawright].