by Josh Clark
Prev NEXT
10 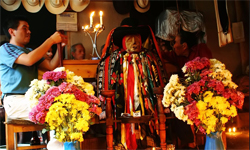 Maximon is what scholars call a syncretized deity; he's an indigenous Mayan god merged with a Catholic saint. In the case of Maximon, or the Man at the Crossroads (often considered Satan in other traditions and the same being who allegedly gave blues guitarist Robert Johnson his talent) was reflected by the Catholic saint Simon.

Maximon spends his time in the home of a member of the Brotherhood of the Cross, who venerates the deity. He is passed from one home to another annually, and on March 21, he is revered with his own day during the Holy Week in Guatemala [source: Mendoza].

Maximon is considered a deity of vice; he alleviates his followers' vices by accepting them as his own. Pilgrims visiting the deity's icon -- a three-foot (0.91-meter) wooden image of a man dressed in bright scarves and clothing, a hat and a cigar -- bring him offerings of cigarettes, alcohol and symbols of other vices, which are given to him, poured into his mouth and smoked by him. As a result, the faithful's vices wither and are lost.