by Beth Brindle
Prev NEXT
10

Railroads -- The Nuisance that Started it All 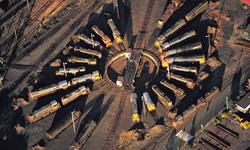