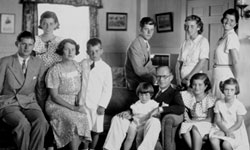 Initially, John F. Kennedy wasn't supposed to be the son destined to become President. Wealthy financier Joseph P. Kennedy had planned to bankroll the future campaign of Joe Kennedy, the oldest of his four boys, but those patriarchal designs were dashed when the 29-year-old pilot was killed in a plane crash over the English Channel [source: Reuters]. In the face of that tragedy, the political buck was passed down to the next-oldest son, John, leaving U.S. Attorney General for Robert and a Massachusetts Senate seat for the youngest, Edward [source: Romano].

With the help of the Kennedy fortune, John and Robert both fulfilled their father's dream but didn't survive long enough to complete their legendary role. John was assassinated in 1963 while president, and Robert was assassinated in 1968 while seeking the Democratic presidential nomination. Edward Kennedy unsuccessfully challenged Jimmy Carter for the Democratic ticket in 1980. Spending the rest of his career in the U.S. Senate, the so-called "Liberal Lion" nevertheless carved out a Congressional record as one of its most influential members and its fourth-longest serving legislator (1962 to 2009) [source: U.S. Senate].

In 2011, when Edward Kennedy's son Patrick retired from his post as a U.S. Representative of Rhode Island, it signaled the end -- or at least a distinct lull -- of the Kennedy political dynasty. For the first time since 1947, no Kennedy went to work in the U.S. Capitol.