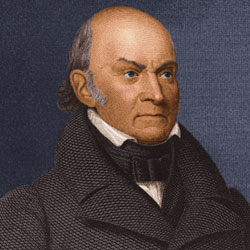 John Quincy Adams had a more distinguished post-presidential career than the time that he served in office.
Stock Montage/Getty Images

The Adams have been called "America's first dynasty," although the family's political heft would peak and fade out prior to the 20th century. Founding Father John Adams worked his way up from a humble upbringing and deftly wheeled and dealt with France and England at the close of the tumultuous American Revolution. But John Adams' vice presidency was considered a lackluster affair, second only to his single term as president [source: Shesol].

The New England family had a chance to burnish its presidential legacy when the oldest son, John Quincy Adams, took office in 1825. But he seemed to have inherited his dad's poor leadership skills, and the sixth president's performance was considered as bad as that of the second. Afterward, however, the younger Adams served admirably in Congress as a staunch abolitionist [source: Shesol]. Great-great-grandson Charles Francis Adams III marked the last in the family line to pursue public office, eventually being selected by President Herbert Hoover for Secretary of the Navy [source: Hess].