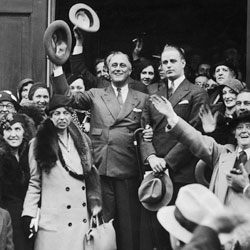 Franklin D. Roosevelt with Eleanor and their son, Elliott, in 1932, the year he won his first presidential election.
Hulton Archive/Getty Images

Many political dynasties travel through immediate families, often flowing from father to son to grandson, or from husband to wife. The Roosevelt connection was much more diluted but nevertheless pivotal in the nation's history. In 1900, Theodore Roosevelt won the vice presidency on William McKinley's presidential ticket, and took over executive reins himself when McKinley was assassinated by an anarchist in September 1901 [source: Miller]. Stepping down from office in 1909, Roosevelt got the political itch once again and fruitlessly ran once more in 1912 on the third party Progressive ticket nicknamed the Bull Moose Party.

Meanwhile, Theodore Roosevelt's niece Eleanor married his fifth cousin Franklin D. Roosevelt in 1905. After a term as governor of New York, FDR became president in 1932 and would return to office three more times, longer than anyone else in American history. Not long into his fourth term, FDR died, leaving some to speculate that Eleanor Roosevelt would pick up the political torch, but she declined the Democratic nomination for Senate [source: Hess]. Two of the Roosevelt sons, James and Frank, later were elected to Congress representing California and New York, respectively, but their political careers wouldn't progress beyond the House of Representatives.