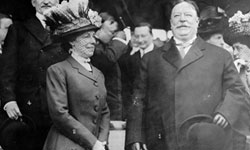 William Howard Taft was much prouder of his appointment to the Supreme Court than winning the presidency.
Topical Press Agency/Getty Images

Just because political ambition runs in a family doesn't mean those expected to campaign necessarily share common dreams of electoral glory. Such was the case for President William Howard Taft, who came from a prominent Cincinnati family and later referred to his 1908 White House race as "one of the most uncomfortable four months of my life" [source: Beschloss and Sidey]. The portly lawyer-turned-president served one term, lost reelection and was later appointed Chief Justice of the United States by President Harding in 1920.

Unlike his reluctantly political father, Robert A. Taft was far more intent on reaching the Oval Office. The Ohio leader served as a U.S. senator and unsuccessfully put his name in the hat for the Republican nomination for president three separate times [source: U.S. Senate]. Years later, third-generation Robert Taft Jr. also won a seat in the Ohio state legislature before moving on to Congress. Most recently in 2005, however, former Ohio Governor Bob Taft -- great-grandson of William Howard and son of Robert Taft Jr. -- sullied the family reputation when he was criminally charged with failing to report gifts and paid outings he received in office [source: Cole].