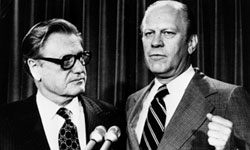 Nelson Rockefeller had hoped to become president but had to settle for the vice presidency under Gerald Ford.
Keystone/Getty Images

The Rockefellers didn't make their name in politics, but the vast fortune John D. Rockefeller amassed with his Standard Oil Company would help bankroll future family members' elections [source: Hess]. The elder Rockefeller, in fact, had no interest in politics, and his only son, John D. Rockefeller Jr., was far more interested in investing wealth back into society rather than influencing people through political office. Nevertheless, Rockefeller's marriage to Abby Aldrich, daughter of a Rhode Island senator, was portrayed as a politically savvy union.

John and Abby's son, Nelson Rockefeller, shared a birthday with his prestigious grandfather and appeared to have inherited his ambition from an early age [source: PBS]. In 1959, Nelson Rockefeller became the Republican governor of New York following a characteristically well-funded campaign. He would never reach his goal of climbing his way to the Oval Office, however. In 1974, following the resignation of President Nixon, Gerald Ford appointed Rockefeller his vice president but abandoned Rockefeller when reelection rolled around.

Great-grandson Jay Rockefeller served two terms as governor of West Virginia. After that, he was elected to the U.S. Senate and, as of 2012, has been reelected four times.