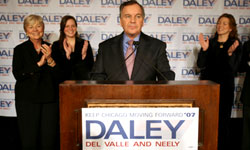 In December 2010, Richard M. Daley became Chicago's longest-serving mayor, having led the city since 1989. He claimed the title from his father, Richard J. Daley, who governed the Midwestern city from 1955 to his 1976 death [source: MSNBC]. Although there were a handful of mayors elected to office between the father and son, the Daleys ran Chicago for a total of 43 years, in many ways molding the Windy City into its modern, bustling status [source: Reiss]. Upon the younger Daley's announcement that he wouldn't seek reelection for a seventh term, news headlines hailed the "end of a dynasty."

The other Daley son, William M. Daley, is also instrumental in government. When former White House Chief of Staff Rahm Emanuel stepped down from the Obama administration to snag the Chicago mayoral seat vacated by Richard M. Daley, William headed to Washington, D.C., to take his place.