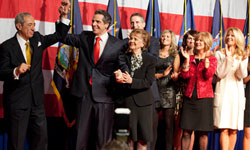 Technically, political power should run through a family for at least three generations in order to qualify as a dynasty, but New York's Democratic Cuomos get a pass since patriarch Mario was a first-generation American [source: Hess]. Son of an immigrant Italian grocer, Mario Cuomo grew up in Queens and eventually became New York governor in 1983. His oldest son, Andrew, served as Gov. Cuomo's political director until the senior politician was defeated at the polls in 1994.

The experience likely came in handy when Andrew decided to run for governor like his father, especially considering he won his 2010 election. And speaking of dynasties, a few years prior in 2003, Andrew legally cut ties with the Kennedy dynasty when his marriage to Kerry Kennedy dissolved. The younger Cuomo eventually may supersede his dad's political legacy since he's considering making a run for the White House in 2016 [source: Hartmann]. And who leaked that possibility to the press? Doting dad Mario, naturally.