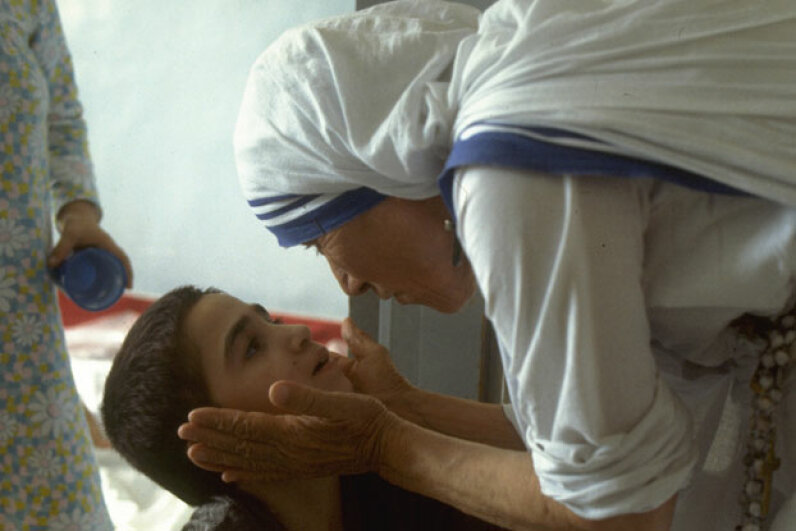 Mother Teresa, shown here visiting a hospital in Beirut, Lebanon in 1982, has come to be synonymous with kindness. © Arnaud de Wildenberg/Sygma/Corbis

From everyday violence to acts of terrorism and acts of God, many of us are weary from the seemingly relentless accounts of atrocities and acts of selfishness happening in the world around us. Spending the day reading the news, you might not guess that humans are, to some extent, predisposed to acts of kindness and feelings of empathy -- a study published in 2012 found that kindness may be in our genes [source: Szalavitz].

Kindness can be a simple smile or hug, or a generous act such as allowing another car to merge ahead of you during your morning commute or -- growing in popularity -- paying for the toll or food order of the person on line behind you. Expressing and receiving kindness makes us feel good; it lifts our mood. But some forms of kindness are easier than others, and we're going to look at 10 dramatic acts of goodness, selflessness and forgiveness from all around the globe. First, the woman we all think of when we think of someone saintly: Mother Teresa. 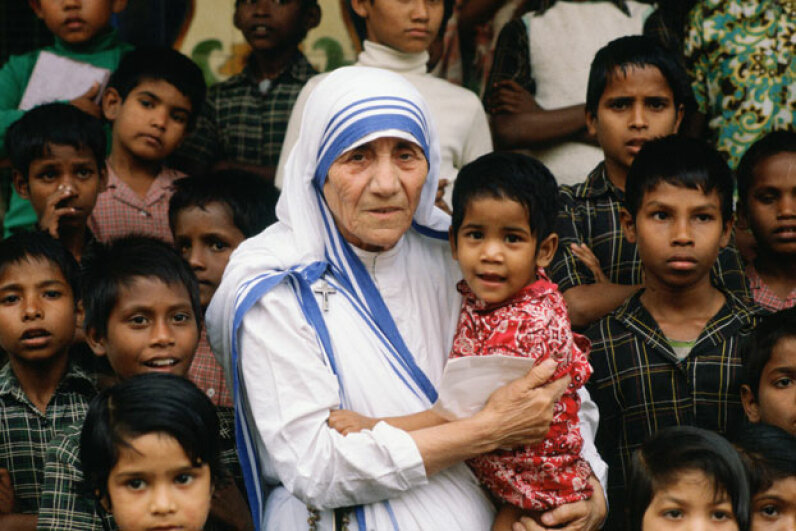 Mother Teresa at her mission in Calcutta, India in 1980. © Tim Graham/Corbis

In 1999, on the cusp of the new millennium, Americans voted Mother Teresa the Most Admired Person of the Century, according to a CNN/USA Today Gallup poll, admired more than Martin Luther King, Jr., John F. Kennedy, Albert Einstein and Helen Keller [source: Newport]. What makes her so special? Mother Teresa, born as Anjeze Gonxhe Bojaxhiu and called the Angel of Mercy, was a missionary and Roman Catholic nun who dedicated her life to helping others. When we think saint, we think Mother Teresa.

In 1950 she established The Missionaries of Charity, an order devoted to caring for the sick, homeless and helpless. In 1979, she won the Nobel Peace Prize. In 2013, though, a controversial study suggested Mother Teresa's saintly reputation may be somewhat exaggerated [source: Chumley]. While her homes for the dying didn't provide much more than prayer to ease suffering, she did devote herself and her life to helping the sick. 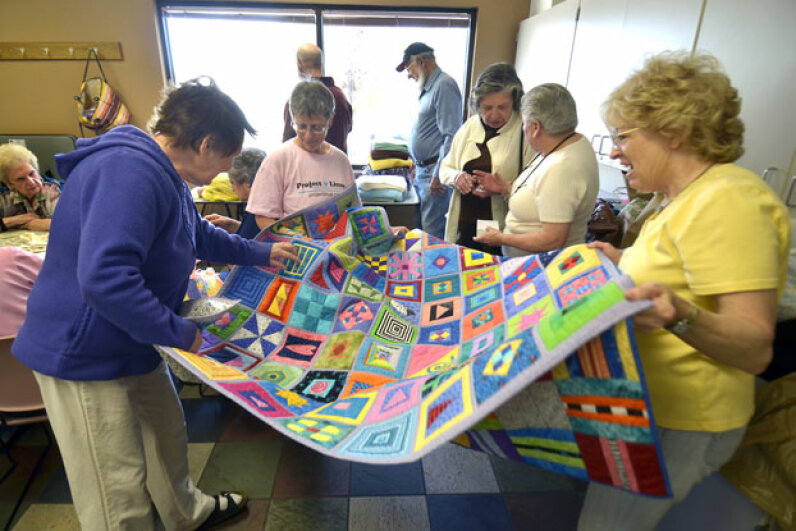 Project Linus is a non-profit organization that distributes homemade blankets and quilts to sick or traumatized babies, kids and teens via hospitals, shelters, social services organizations and other charitable organizations in an effort to spread comfort and a feeling of security when it's needed the most.

Project Linus has local chapters and volunteers -- also called "blanketeers" -- in every state. In Fayette County, Ga., for instance, since 2010 Project Linus blanketeers have sewed, crocheted, knitted, quilted and distributed 1,155 blankets to kids in their local community, and in 2012 sent just shy of 147 handmade blankets to kids impacted by Hurricane Sandy [source: The Citizen]. 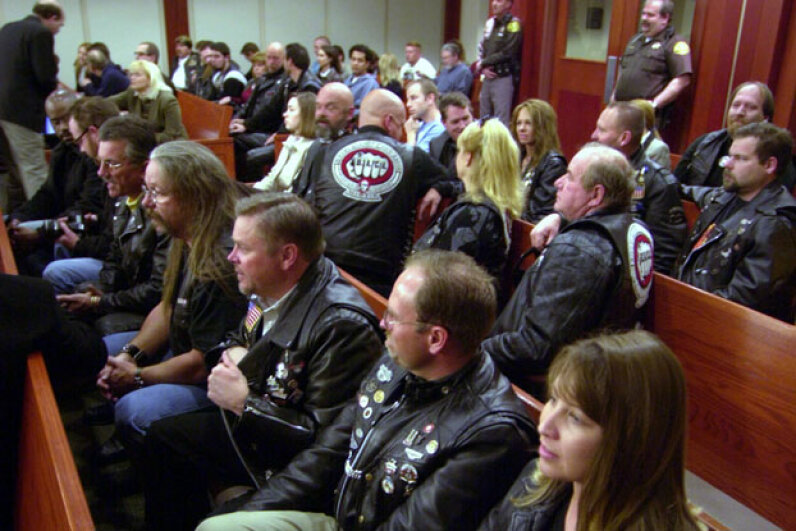 Bikers Against Child Abuse, or BACA, is a non-profit organization that has been working to keep kids safe and raise awareness about child abuse since 1995. Their goal: to remove fear from the lives of physically, sexually and emotionally abused kids, an important step on the road to healing. The group also assists in funding therapy and therapeutic activities.

Bikers who volunteer with the organization are committed to making children feel safe -- and are called to help kids in verified child abuse cases by law enforcement offices and child-care agencies, as well as others who may be close to a particular case. And their presence -- whether it's at a court proceeding or parole hearing, accompanying a child to or from school or even just in the neighborhood at night -- is meant to intimidate abusers. They're not vigilantes; think of them as body guards. Wouldn't you feel safer with your own formidable group of Harley-riding guys on your side? And that's the point. 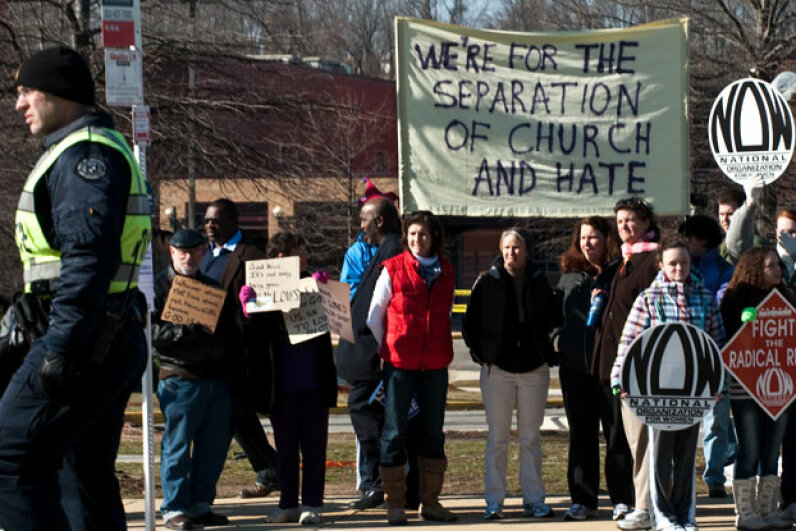 The Westboro Baptist Church (WBC), a fundamentalist church considered a hate group by many because of their anti-gay agenda, is often seen picketing high-profile and military funerals with large, offensive signs.

What's begun to happen when this controversial group announces its protest intentions is nothing short of a community uprising. Vassar students, for example, planned a counter-protest when the WBC planned to picket their LGBT-friendly campus. Texas A&M students formed a human chain to block any WBC protestors from picketing a military funeral. And it's not just the college crowd that's fighting back.

Counter-protestors who are part of an organization called Angel Action wear 10-foot tall angel wings and surround WBC picketers, blocking them from view. And a group called the Patriot Guard Riders offer non-violent protection, a shield, often just symbolic in nature such as carrying flags and surrounding groups of WBC protestors so they can't intrude on grieving families and friends at military funerals. The group also formed a silent protective barrier against WBC interruptions at the funerals of Sandy Hook Elementary School shooting victims.

The Work of the Bill & Melinda Gates Foundation 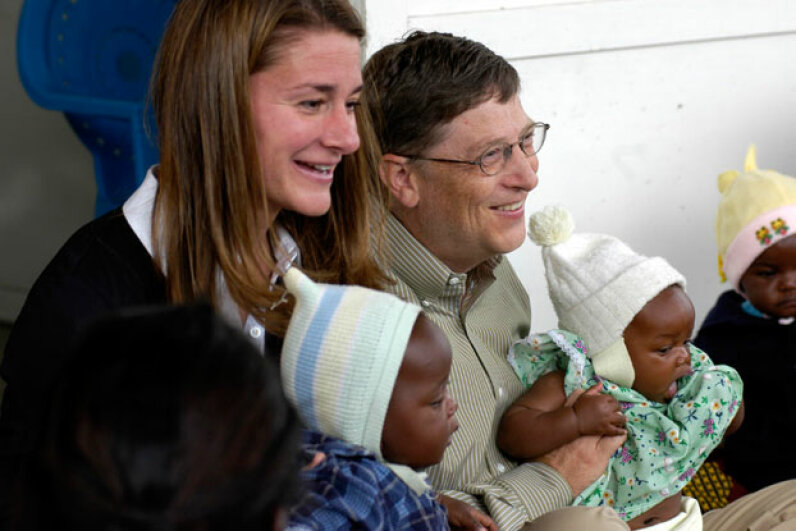 The work of the Bill & Melinda Gates Foundation is not only a dramatic act of kindness, it's a dramatic act of philanthropy. Gates, as part of The Giving Pledge program created by Gates and Warren Buffett, has publicly promised to give away at least half of his wealth during his lifetime. By 2011, Bill and Melinda had already given $28 billion to the foundation (more than one-third of their wealth) [source: Nichols].

The foundation partners with and grants money to organizations solving global development issues such as poverty and hunger, global health issues such as preventative vaccines, groundbreaking advancements in health care solutions (a better condom, anyone?), as well as access to affordable and reliable drugs. The foundation, for example, granted $112 million to help save at-risk newborn lives through Save the Children, and $456 million on the PATH Malaria Vaccine Initiative (MVI) [source: Bill & Melinda Gates Foundation]. 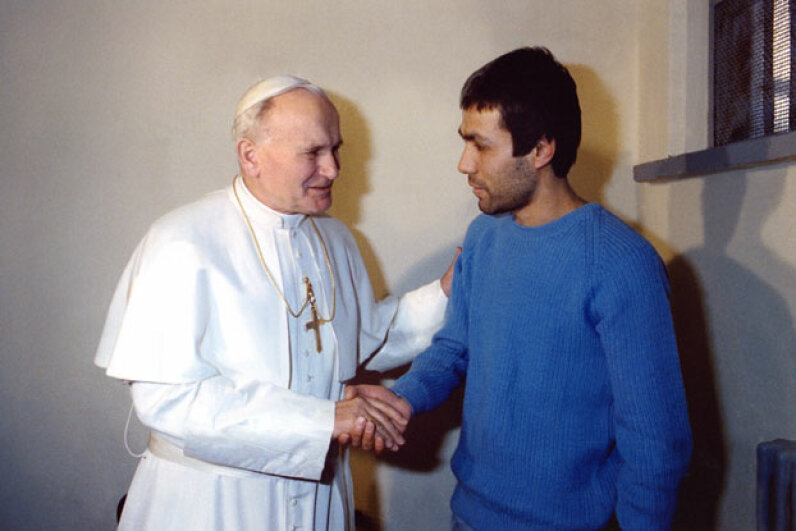 A Turkish assassin, Mehmet Ali Agca, fired three bullets at Pope John Paul II in St. Peter's Square in Vatican City on May 13, 1981. One bullet bounced off the Pope's index finger and entered his abdomen. Another shaved his right elbow. Later, John Paul would say he survived only through the divine intervention of the Virgin Mary.

On May 17, 1981, just four days after the assassination attempt, the pope publicly forgave Agca -- stating he'd forgiven him while in the ambulance during transport to the Gemelli hospital -- and in 1983 visited Agca as he served a 19-year prison sentence. During that visit John Paul held Agca's hand and forgave his would-be assassin face-to-face.

Nelson Mandela Invites His Jailer to His Inauguration 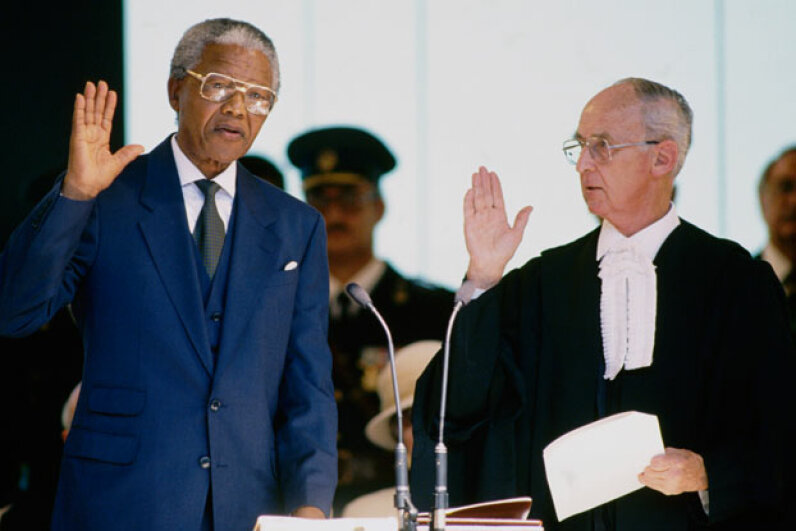 Nelson Mandela being sworn in as the first democratically elected President of South Africa in 1994. © Louise Gubb/CORBIS SABA

Nelson Mandela was convicted of sabotage during apartheid in South Africa and served 27 years in prison on Robben Island. When he was released in 1990, he didn't seek revenge against his former jailers; rather, he invited one of them, a white man named Christo Brand, to his 1994 presidential inauguration. In fact, Brand was also invited to Mandela's 20th anniversary celebration of his release from prison. Another of Mandela's jailers, James Gregory, also spoke and wrote about his friendship with the political prisoner.

Gregory and Brand both have spoken about their deep respect for Mandela -- Brand, specifically, has spoken about his transformation from a pro-apartheid young man into a man against racial segregation and oppression. Mandela's influence, according to Brand, was life-changing, and their friendship has become a lesson in forgiveness for many around the world. 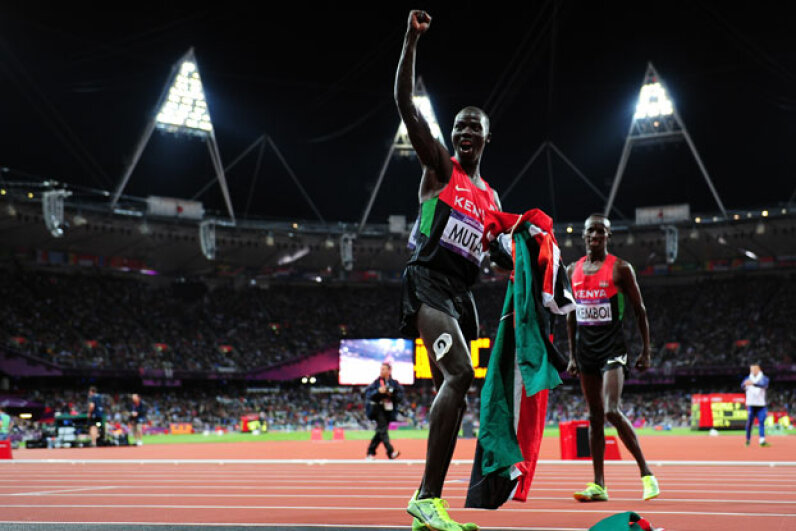 Kenyan runner Abel Mutai was leading the cross-country race at an event in Burlada, Navarre, in December 2012 when he mistakenly thought he'd crossed the finish line. In fact, he was still about 32 feet (10 meters) before the actual finish line.

Spanish runner Ivan Fernandez Anaya, poised to capture second place, had the opportunity to grab the gold, but he didn't. Instead, Fernandez Anaya caught up to Mutai and guided him into first place, gesturing to his fellow runner and rival to keep going. Later stating he didn't deserve the win, Ferandez Anaya chose honesty over victory. 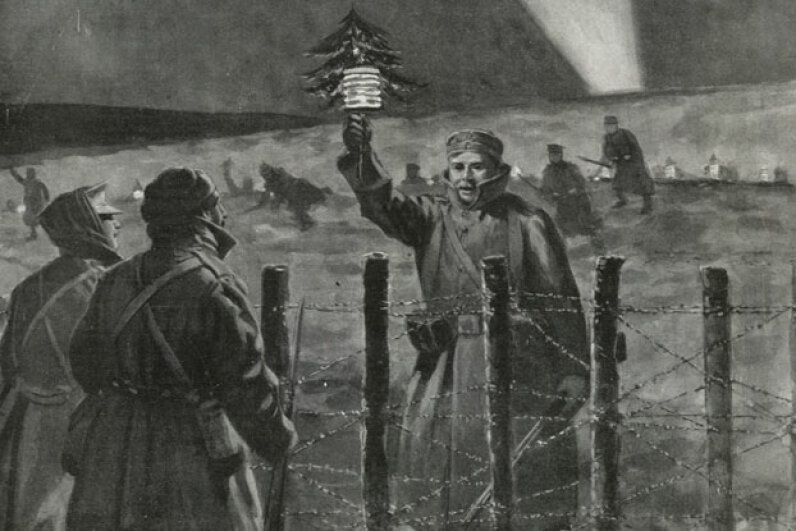 This illustration of a German soldier approaching the British lines with a small Christmas tree appeared in a newspaper report of the Christmas Truce. © Photo by The British Library/Robana via Getty Images

By December 1914, World War I had claimed the lives of nearly 1 million people (as many as 14 million would die in the war), but for one day -- Christmas Day -- a truce broke out between British and German soldiers.

As the story goes, and it's unknown how much is truth and what parts may be exaggerated, British soldiers hiding in their trenches began to hear a familiar tune coming from the German trenches nearby -- it was "Silent Night," and it began a day of unauthorized fraternization between enemies. There were no bullets shot or bombs exploding that day during the Christmas Truce, just war-ravaged men shaking hands, sharing cigarettes, and kicking a can around on the Western Front. 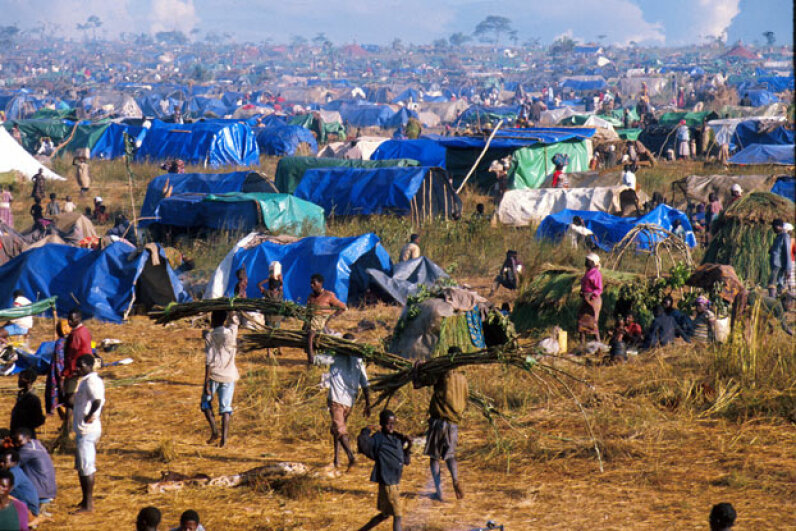 A May 11, 1994 photo of refugee camp in Tanzania where more than 300,000 mostly Rwandan Hutus lived after fleeing the Tutsi-led rebel Rwandan Patriotic Front. The RPF entered Rwanda to stop the genocide of Tutsis by the ruling Hutus. © Paula Bronstein/Liaison/Getty Images

In 1994, ethnic fighting between the Hutus and Tutsis people of central Africa was raging, and it was that year Iphigenia Mukantabana's husband and five children were slaughtered by Hutu militia. In fact, it was her neighbor, Jean-Bosco Bizimana, who helped commit the horrors against her family.

Ten years later, Iphigenia is in the basket-making business -- part of the Rwanda Path to Peace project with Macy's department stores in the U.S. -- with master weaver Epiphania Mukanyndwi, who happens to be the wife of Jean-Bosco Bizimana.

Jean-Bosco served a seven-year prison sentence for the atrocities he committed during the genocide, but it was his public request for forgiveness at a Rwandan gacaca court that helped Iphigenia move on with life and forgive Bizimana for his wrongs.

The day I began writing this article, bombs exploded at the finish line of the Boston Marathon, and immediately I was relieved to be researching stories of goodness instead of reading stories of hatred. It's refreshing to take a break from the chaos of the world and visit some stories of compassion instead, and maybe pick up a little inspiration along the way.