by Patrick J. Kiger
Prev NEXT
8 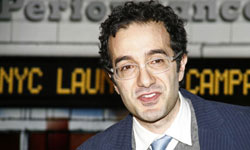 Winning a John D. and Catherine T. MacArthur Foundation fellowship -- popularly known as a "genius grant" -- is one of the greatest accolades that a nerd can receive. It's not just an official certification that you have a brain so irrepressibly awesome that your mere presence should prompt mere mortals to kneel down and shout, "We're not worthy!" But it's also recognition that the esoteric thing -- whatever it is -- that you've been devoting so much neural activity to over the years has turned out to be really important and worthwhile.

In 2011, one of those elevated to this brainiac pantheon includes Jad Abumrad, a radio host and producer for the nationally syndicated program "Radiolab." Abumrad is an upgraded, multimedia version of Bill Nye or the late, great Carl Sagan. He's a radio documentarian whose gift is to be able to take complex topics -- the nature of numbers, the evolution of altruism -- and make them not just comprehensible but entertaining, even to those of us who normally struggle to follow the plot developments on "Fringe."

Abumrad happens to be a talented composer on the side, and he draws on his musical skills to orchestrate the dialogue, music and sound effects for his documentaries, weaving all these elements together in a pleasing symphony of data. Moreover, he's also astute and enough of a broad-ranging autodidact to be able to conduct skillful interviews with experts in a dizzying array of fields [source: MacArthur Foundation].