by Patrick J. Kiger
Prev NEXT
10 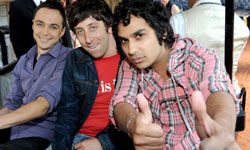 If you wrote a TV comedy about baseball players, you'd get a zillion complaints from baseball fans if the characters incorrectly explained the infield fly rule or confused Bobby Bonds with Barry Bonds. So it's only logical that for a TV show about nerds, who by definition are obsessed with minutia, you'd need to get every last detail correct.

That's why producers of the hit CBS comedy "The Big Bang Theory," which centers around a group of fictional physics nerds at California Institute of Technology, have enlisted the guidance of an actual credentialed physics nerd, University of California Los Angeles professor David Saltzberg. A product of Princeton and the University of Chicago, Saltzberg did his post-doctorate research at CERN, the prestigious European research center. When he's not teaching classes at UCLA or traveling to Switzerland to work with the Large Hadron Collider, a massive device that scientists are using to answer some of the most fundamental questions in physics, the 40-something professor peruses the show's scripts, looking for science-related mistakes.

As Saltzberg explained in an interview with Wired, writers for the series also often call upon him to suggest a particular experiment or problem that the characters should be working on. For example, in one instance, Saltzberg actually supplied the show with a physics problem about the axion -- a hypothetical elementary particle -- that he'd been trying to solve in his own work. He's also on the set during tapings and sometimes rehearsals, in case one of the fictional science nerds needs some help writing an equation on the whiteboard [source: Watercutter].