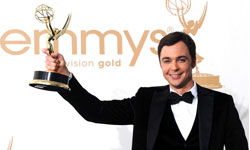 It was the year of the nerd -- even at the Emmy Awards. Actor Jim Parsons of "The Big Bang Theory" won outstanding lead actor in a comedy series.
Frazer Harrison/Getty Images for TV.com

Sure, there was a time when being labeled "nerd" -- a broadly-encompassing term for a person who's myopically devoted to science, computers, and/or esoteric cultural pursuits like "Star Wars" trivia or "Dungeons & Dragons" -- was the nadir of uncoolness. Nerds were considered clueless about fashion and, well, to put it politely, socially and romantically challenged. Think of Anthony Michael Hall, the archetypical teen science nerd in 1980s movies "Sixteen Candles" and "The Breakfast Club," and it's easy to understand why only the truly brave dared to fly their nerd flags high -- revealing their enthusiasm for trigonometric functions or disclosing their desires to compile a thesaurus for one of J.R.R. Tolkien's elf languages.

But since then, things have changed. In 2011, nerds ruled -- totally. Maybe it had something to do with the smash success of the CBS TV sitcom "The Big Bang Theory," which depicts the adventures of three physicists and an aerospace engineer who are as charmingly endearing as they are geeky. Or perhaps it was recently-deceased former Apple Chief Executive Steve Jobs' influence that instilled in us a healthy respect for the transformative power of nerdiness. After all, his obsessive focus on perfection and occasional disinterest in personal hygiene and social graces certainly didn't stop him from launching revolutionary and wildly popular computers and mobile gadgetry.

In fact, even the world's celebrities seem to have realized that the nerd's characteristic disregard for fashion dos and don'ts is, well, a pretty cool fashion in itself. Many of today's young male heartthrobs are skinny, bespectacled, awkward -- in a word "nerdy."

So, without further ado, in no particular order, here are 10 nerds we held dear in 2011.